Life of Pi: The Unabridged Audiobook by Yann Martel 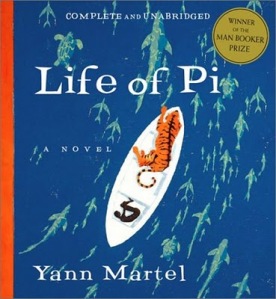 Book description~ Pi Patel, a God-loving boy and the son of a zookeeper, had a fervent love of stories and practices not only within his native Hinduism, but also Christianity and Islam. When Pi is sixteen, his family and their zoo animals emigrate from India to North America aboard a Japanese cargo ship. Alas, the ship sinks–and Pi finds himself in a lifeboat, his only companions a hyena, an orangutan, a wounded zebra, and a 450-pound Bengal tiger. Soon the tiger has dispatched all but Pi. Can Pi and the tiger find their way to land? Can Pi’s fear, knowledge, and cunning keep him alive until they do?

What a curious and fun book! Sharing a life boat with a Bengal Tiger? No problem! Learning how to fend for himself? No problem! In a more modern version of Noah’s Ark-meets-Jungle Book-meets-Madagascar-meets Castaway, Life of Pi marks the second Man Booker Award Winner that I’ve read, er listened to, this year (Room, the first). If you are an animal lover, you’ll be fascinated by all the zoological (no, it’s not pronounced ZOO, it’s pronounced ZOE-uh-logical) references and whimsy of this novel. Son of the Pondicherry zookeeper, Pi comes of age as he learns from his family just how truly wonderful zoos can be, if run properly. He learns an appreciation and understanding for animals unlike most young boys, AND an appreciation and understanding of many religions that prepares him for his life’s journey.

“Just beyond the ticket booth Father had painted on a wall in bright red letters the question: DO YOU KNOW WHICH IS THE MOST DANGEROUS ANIMAL IN THE ZOO? An arrow pointed to a small curtain. There were so many eager, curious hands that pulled at the curtain that we had to replace it regularly. Behind it was a mirror.” 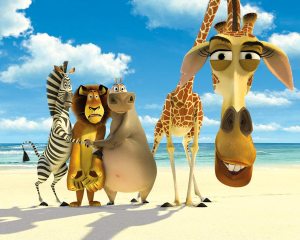 The Patel family pack up their zoo animals on a Japanese Cargo Ship to emigrate from India to North America. When the boat sinks, Pi the castaway is left to fend for himself and you won’t believe what happens! I found myself laughing out loud throughout my morning commute listening to this audiobook. This is one of those books that everyone should read before they die, it’s very existential…IF you can get past some of the more graphic survival scenes midway through the book. Martel’s writing style is both artful and humorous.

Although this book is told in a non-linear way which I normally like, because I listened to this one, I’d want to go back and re-read this again in 2011 when I have time to read the print novel. The author’s structure was a bit distracting on audiobook whereas in print I think it’d be a nice palette cleanser in between Pi’s adventures. This audiobook also took me longer to finish so I would have enjoyed it a bit more having more solid time to devote to it. If you’re going to listen to this audiobook, I recommend you save it for a roadtrip so you can listen to it without interruption to keep the momentum going.

The elements of fantasy make Life of Pi really fun for all ages, yet also make you appreciate and view your world in a more detail-oriented way. I highly recommend this book for both young and old if you need a stocking stuffer for your young adult or friend, and look forward to revisiting this again next year. From friends of mine who have also enjoyed this novel, it’s even better the second time around.

Almost finished Hotel on the Corner of Bitter & Sweet; stay tuned for my review later this week!