Oogy: The Dog Only A Family Could Love by
Larry Levin

In 2002, Larry Levin and his twelve-year-old twin sons, Dan and Noah, brought their ailing cat into the neighborhood animal hospital to be put to sleep. What began as one of their family’s saddest days took a sharp turn for the better when the oddest-looking dog they’d ever seen bounded into the waiting room and into their arms.

Larry and the boys assumed that this white puppy had been in a fire- he was missing an ear and half his face was covered in scar tissue- but they were soon told a different story. He had been near-fatally injured as part of a dog-fighting ring in the area, discovered by the police, and left at the after-hours service of the hospital. When the hospital administrator found him in the morning, he was so bloodied and battered she knew he had a slim chance of survival. But, determined to keep him alive, she convinced her veterinarian boss to perform a series of surgeries and readied him for adoption.

The Levins- Larry, his wife Jennifer, and their sons- accepted him as one of their own from the moment they met him. As the rambunctious puppy matured into a loyal and protective member of the family (dubbed the “Third Twin”), he marked himself indelibly on their lives, healing long-held wounds and showing the twins, themselves adopted as infants, that unbreakable bonds can be formed in all kinds of families.

Oogy is about the power of redemption, and how animals and people can overcome the greatest of odds. And Oogy is an incredibly special animal, whose sense of security and being loved has persevered despite his trials. This one-in-a-million dog and his story will enter your heart and stay with you for a long time.

As is the case with most animal lovers, books like these are hard for me to get through for the sole reason of the fact that I don’t want to be sad. I hold a very special place in my heart for all animals, particularly dogs. While I enjoy memoirs that center around dogs and their lives (a favorite that comes to mind is A Big Little Life by Dean Koontz), stories that stem from an animal being abused, neglected, or mistreated in any way are harder. Even if I know they have a happy ending, the thought of what the dog went through and the fact that others still are abused on a daily, regular basis, absolutely breaks my heart. So I read Oogy with a great deal of caution, keeping an arm’s length of space so as not to allow myself to be sad.

That was hard to do given the situation. Oogy was a “bait dog” used to teach dogs how to fight. The fact that people in our country (or people ANYWHERE) participate in, train dogs to, and profit from dog fighting makes me sick to my stomach. I feel there is a special place in Hell for them. Dogs that are found as strays, homeless, or “free to good homes” may face the horrific and traumatic fate as a bait dog. Thus was the case with Oogy.

When Larry and his sons find him (or shall I say when OOGY found THEM, as ‘they’ say dogs find us), he was in the middle of rehabbing from a near fatal experience as a bait dog. He had lost one ear, had already gone through surgeries, had bandages on his heads, and was in pretty bad shape. The connection was instant among Oogy and the Levin boys. (I did find it interesting, by the way, the small role Larry’s wife Jennifer has in the book. Guess this is another example of dog really being man’s best friend) 🙂

With nobody to claim Oogy, Larry did not have trouble adopting him and bringing him home. I thought it was so sweet the way he talked to Oogy every day and loved that he promised never to cause him pain nor fear again. I believe dogs can understand us to an extent, and love this very real relationship this man and dog had from the very beginning.

When Oogy tears his ACL and has to go through reconstructive surgery as well as water therapy (which due to the panic he felt in the water, was modified for him elsewhere in keeping with Levin’s promise), it reminded me of LibraryLove’s Akitas, who have both undergone this surgery. The play by play was the exact same in the book, from the surgeons telling Levin what to expect, to his sleeping on the floor with Oogy to prevent him from climbing any stairs, to the water therapy. It was nice to read in familiar territory and made me feel that much closer to Oogy.

As  Oogy is still alive, this story does not end with death (refreshing for an animal story/memoir), rather it is a heartwarming collection of stories, moments, and love shared between the Levin family and their very special dog. It was touching and surprising to see the sweet mannerism’s of a dog who had been through the trauma he had. A miracle itself that he survived, it is truly shocking Oogy remained as sweet and loving as he did, both with other animals (he just wanted to play with everyone) as well as humans (the bond with the twin boys will make you smile as you flip through).

If you can face the reality of the animal abuse that goes on in this world (I realize sometimes it’s easier to pretend if we don’t hear about it, it doesn’t happen), then I recommend this book for you. Oogy is a special dog who received a second chance and then loved unconditionally. I can’t wait to meet him one day when we are in a place where dogs will never have to worry about being harmed again. 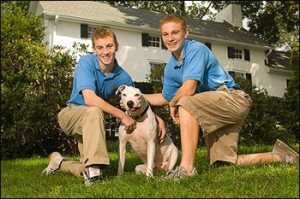